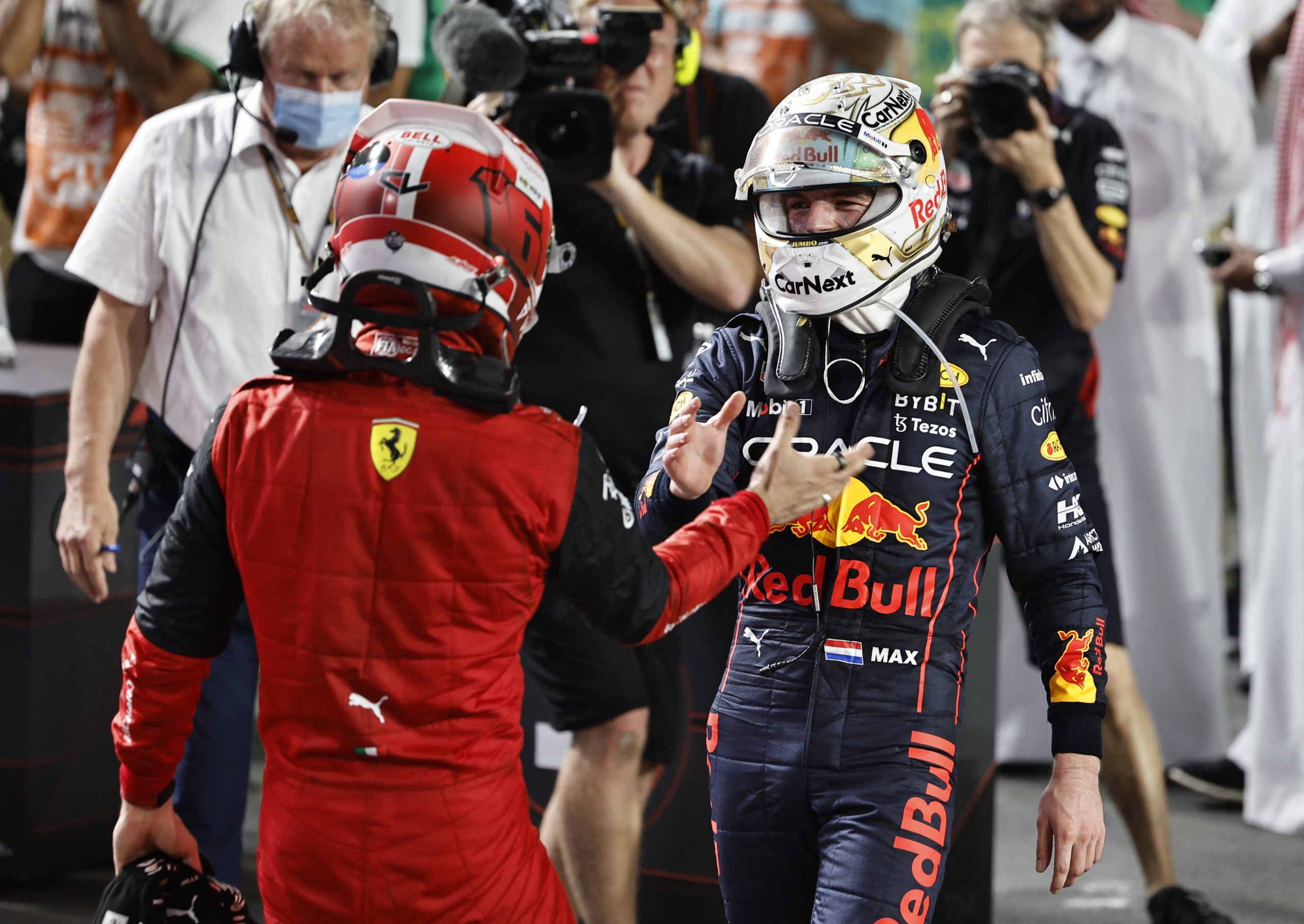 Ferrari and Red Bull put on a great show for a second consecutive Formula 1 weekend, with Max Verstappen coming out on top against Charles Leclerc in a thrilling 2022 Saudi Arabian Grand Prix.

Verstappen and Leclerc were the stars of the show once again and it’s a battle we cannot get enough of in 2022, as the final 10 laps had the pair trading blows lap after lap.

Their duel under the lights in Bahrain really did set the tone for the rest of the season and we had the second instalment of this epic fight on Sunday at the Jeddah Corniche Circuit, with DRS playing a major role in the battle.

Before the wheel to wheel racing, Leclerc demonstrated his smart head on the safety car restart, just as he did in Bahrain, by braking and accelerating up to the final corner then edging Verstappen to the outside so he couldn’t challenge him going down to Turn 1.

The virtual safety car saw Verstappen decide that was his time to strike so he began to close the gap with 10 laps to go and applied serious pressure to Leclerc.

On lap 42, Verstappen went by Leclerc at the final corner, only because the Ferrari driver knew he could use DRS to fight back on the main straight. That’s exactly what happened.

Verstappen realised this trick so he tried to ensure he was behind on the next lap at the entry of the final corner. He braked hard, but so did Leclerc as both drivers locked up. This time, Leclerc floored the throttle to scamper away.

Eventually, Verstappen managed to overtake Leclerc and hold on, but the position of the DRS detection zones made for a memorable battle.

“It was very tricky,” Leclerc told Sky Sports F1. “I don’t think there was much more I could do. I think we did everything right – the strategy, the pitstops. We are working very well as a team. The only thing we missed was a bit of a lower downforce level.”

Leclerc is absolutely spot on here, as he did everything perfectly and couldn’t do anything about the straight line speed of the Red Bull.

The only other on-track duel which was similar to Sunday’s was Fernando Alonso‘s and Lewis Hamilton‘s scrap at the 2013 Canadian GP, when both drivers lifted off the throttle to try and have DRS.

Although Verstappen won the race, you could argue it’s 2-0 to Leclerc in the racecraft department because he made the battle go on for longer than it should have, with a very smart racing head.

Will Perez and Sainz be left behind?

Yet again, Sergio Perez and Carlos Sainz were missing the final tenth or two to join the lead battle when the pace was high.

Perez was unlucky though this time round because the timing of the safety car cost him the lead, as everyone else had a cheaper pit stop by pitting under non-green flag conditions.

When the pace ramped up though, Verstappen and Leclerc pulled away by trading fastest laps and sector times and there was nothing anyone else could do. Those are the signs of great champions like Michael Schumacher and Mika Hakkinen or Ayrton Senna and Alain Prost.

They can perform at an incredible level and deliver every single lap, which is frustrating if you’re a teammate of such a driver.

Perez did a fantastic job to take pole position, his first once in F1 after 215 races, and was looking strong in the lead during the early part of the race.

But even before the safety car, Leclerc chopped his deficit to Perez from 2.6 seconds to 1.4 seconds, forcing the Mexican to make a pit stop.

When push comes to shove, Leclerc and Verstappen have pace in hand, which is something Sainz and Perez are going to have deal with for the rest of the year. It’s hard to see how they can raise their game to match the consistency of setting blistering lap times, whilst maintaining enough performance in the tyres.

You could make a good argument to say Haas had the third best car at the Jeddah Corniche Circuit, as Kevin Magnussen finished in ninth, albeit with a very sore neck due to the high speeds and relative lack of fitness of the Dane.

Haas gambled by starting Magnussen on the hard tyres, which didn’t work because of the mid-race safety car that came at the worst time for Haas, along with Lewis Hamilton and Nico Hulkenberg who also tried the same strategy.

Considering Hamilton claimed Magnussen was able to get away from him during the race, Haas could have had two cars in the top seven if they executed a clean weekend. In that sense, they will be frustrated.

Mick Schumacher‘s mistake when he spun his car on the exit kerb at Turn 12 had huge ramifications as the damage was too severe for the team to rebuild. Thankfully, Schumacher was able to walk away but he missed out on a big opportunity to score his first points in F1.

Haas have to make the most of the great car they have, in case they fall behind in the development race to the likes of Alpine, McLaren and AlphaTauri.

George Russell had a brilliant weekend, especially after his poor qualifying in Bahrain. The former Williams driver was over six tenths of a second faster than teammate Hamilton in Q1, who was eliminated from the first part of qualifying for the first time on pure pace since 2009.

In the race, Russell maximised the performance of his car and had a pretty lonely evening in Jeddah. That’s where Mercedes are at. They are still very far behind the top two teams, but are just ahead of the midfield as long as their drivers deliver.

“It was quite an enjoyable race considering I was all by myself throughout,” Russell told Sky Sports. “It was probably the most physical race I have experienced. I want to be doing this for victories, not fifth.

“The car felt good, the balance was great. We were just lacking overall grip. It was a cool experience, I think all the drivers were pushed to the limit. We are making baby steps at the moment, we need to make some bigger leaps. I am sure we can, but timeline I don’t know.

Russell certainly delivered and he’ll gain plenty of confidence to beat Hamilton so comfortably, something the seven-time world champion hasn’t experienced for nearly a decade.

Lando Norris‘ seventh place shouldn’t be celebrated by McLaren, but it’s a massive improvement from the season-opener when they had the slowest car on the grid.

Norris says the car is really bad in the slow corners, which doesn’t bode well for McLaren because there are not many tracks that are full of medium and high speed turns like the Jeddah Corniche Circuit.

Ricciardo could have scored points too, had he not lost drive in the middle of the race. McLaren will be hoping the Saudi Arabian GP isn’t the high point of their season, and instead marks the start of a revival for the team.

Given how close the field is, who knows what the pecking order will be in a fortnight’s time as F1 returns to the Australian GP for the first time since 2019.