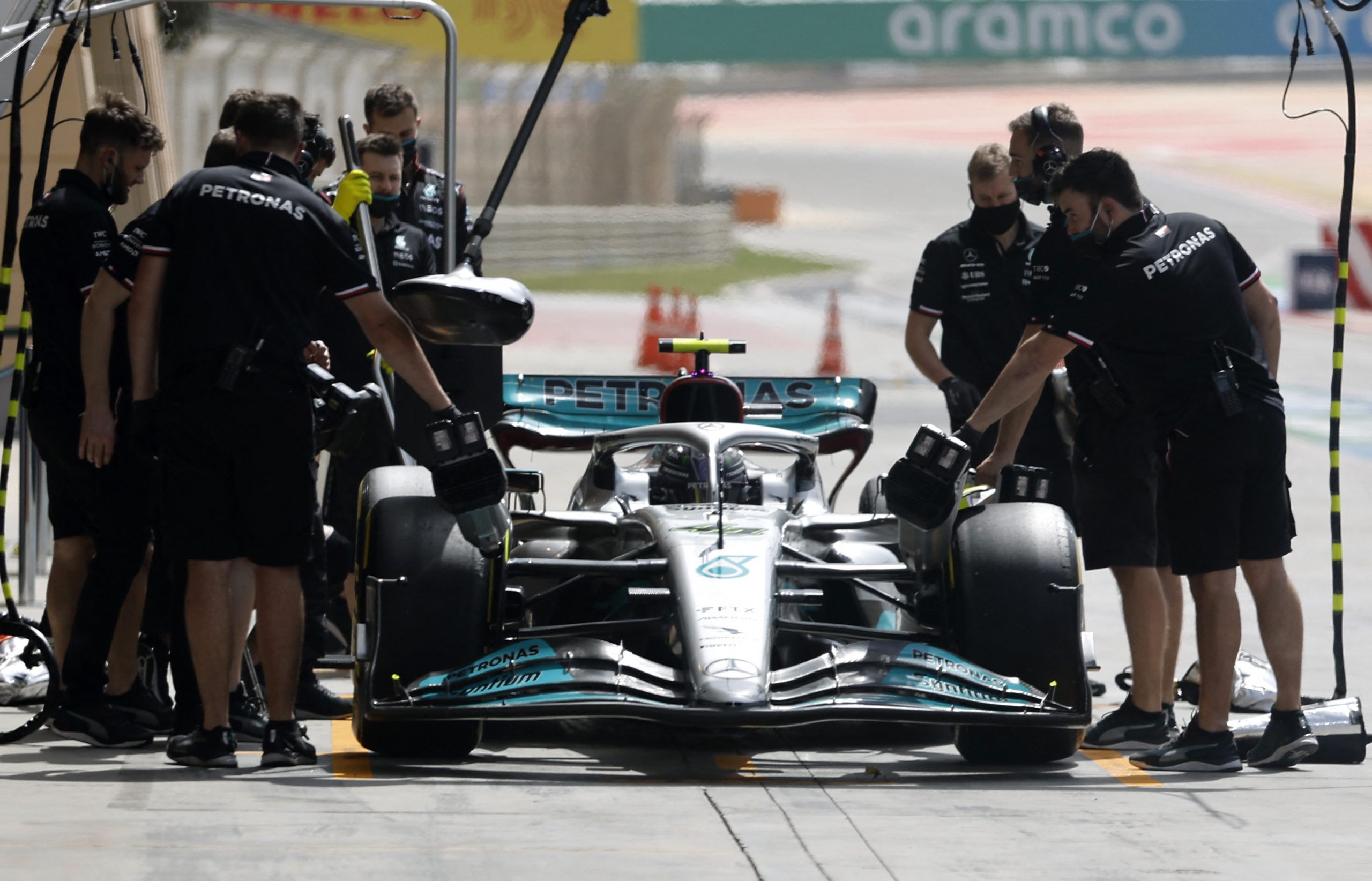 As AlphaTauri‘s Pierre Gasly topped the timing sheets on the first day of pre-season testing at the Bahrain International Circuit, all eyes were on Mercedes and their, lack of, sidepods.

Lewis Hamilton rolled the W13 out of the garage in the morning and stunned the paddock with the design of the sidepod area which features remarkably small intakes and radiators.

The reason for this innovation is all for an aerodynamic benefit as Mercedes have the tightest package on their car. Never has Formula 1 seen sidepods which are so high, narrow and far back.

Toto Wolff appears to be confident about the legality of the W13, emphasising that the FIA were involved with the design process and were given CAD data.

Perhaps the most intriguing comments came from F1 managing director Ross Brawn, who played a big role in the creation of the 2022 regulations.

“The Mercedes concept we didn’t anticipate, it’s a very extreme interpretation of the regulation,” said Brawn.

“Inevitably, there’s going to be a lot of debate about their interpretation. From our perspective it’s largely about does it affect the objective of the regulations.

“But from the teams perspective, they want to be sure that no one has taken an interpretation that’s not correct.”

Brawn, who has been in Mercedes‘ position before when he was at Ferrari during Michael Schumacher‘s title-winning years, also explained that the FIA must consider any objections from other teams.

“The regulators of the sport know what’s going on, and they’re OK with is so far,” added Brawn.

Has the new Mercedes concept worked?

It’s far too early to say whether Mercedes‘ innovative sidepods are a game-changer or not. On track, it looked like a handful for the majority of the day as porpoising issues continued to plague most of the cars.

Hamilton and George Russell didn’t exactly set the world alight on their short and long run pace either, so there’s nothing to suggest Mercedes will run away with the championship because of their sidepod design.

The sidepods being so far back may compromise the airflow towards the rear of the floor, but this is a team that’s won the last eight Constructors’ Championships so it’s hard to argue against them.

New innovations don’t always show their full potential straight away either, so the combination of a dusty, hot track and Mercedes‘ desire to get through their testing programme will explain their lack of pace on the first day in Sakhir.

Ferrari quietly go about their business

Whilst Red Bull and Mercedes prepare for their first big dispute of 2022, Ferrari continued to look strong and arguably had the best handling car on day one.

Charles Leclerc is gelling with the F1-75 nicely and the team’s decision to exploit the potential of their current package, rather than bringing major upgrades to the car, could give them an early season advantage.

Neither Leclerc or Carlos Sainz did stints of more than 12 laps, so we can’t fully say Ferrari will be battling for the win at the season-opener.

Nevertheless, they had another clean day and were able to comfortably clear the century lap mark along with Red Bull, Mercedes, Alfa Romeo, Williams and AlphaTauri.

Gasly on top, but nobody stands out

After crashing out of the last day of testing in Barcelona, Gasly ended the first day of the second test on top as he posted a 1:33.902 on the C4 tyre.

For comparison, that’s 3.3 seconds slower than Max Verstappen‘s day one test time from 2021 when a sandstorm engulfed the Bahrain International Circuit.

Question marks remain about the competitiveness of the Alpine, with a cooling issue forcing Fernando Alonso to lose track time in the afternoon, whilst McLaren had a brake issue which limited them to 50 laps.

Considering how strong Lando Norris and Daniel Ricciardo looked at the first test, Norris‘ lack of running on the opening day in Bahrain will be a setback.

Alfa Romeo had by far their best testing day yet, as they completed 120 laps, whilst Haas were ready to get some mileage done in the afternoon following their late freight arrival.

Haas are preparing to run the car after the three days of testing on Sunday, as FIA rules allow teams to make up for lost time due to circumstances out of their hands.

However, three teams have voted against that prospect, so Haas may not get back the time the lost on Thursday morning.