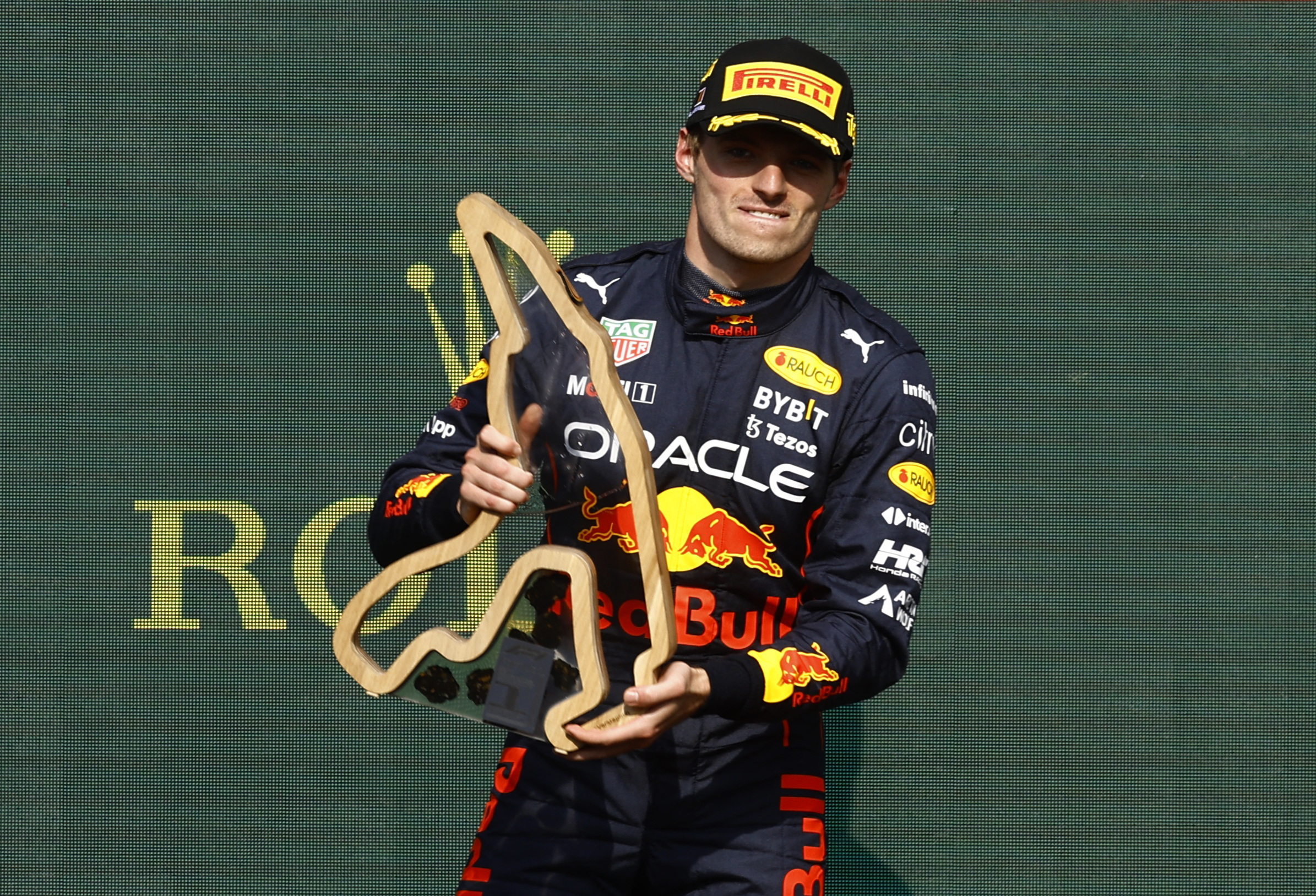 As the US Open tennis begins in New York, the 2022 Formula 1 title race might just be over as Max Verstappen romped to victory at the Belgian Grand Prix.

He really has gelled with his car in recent events and that was proved at Spa-Francorchamps throughout the weekend with a stunning performance.

It’s not normal that a driver starting from 14th is favourite for the race win, yet that was the general feeling before the Grand Prix.

Verstappen is now 93 points ahead of teammate Sergio Perez in the F1 driver standings, with Charles Leclerc 98 points adrift.

Verstappen started got the ball rolling from the Canadian GP in June, after, for his high standards, a slightly below par opening prat of the season.

Since Montreal, he’s been on another level compared to Perez and that really showed at the weekend.

From the opening lap in FP1 on Friday, Verstappen said has comfortable with the car and that’s a dangerous sign for the rest of the field.

The Dutchman put eight tenths of a second on Leclerc in FP2 which he replicated in qualifying where he needed just one lap in Q3 to get the job done and take pole position by 0.632 seconds.

Spa is the longest track on the F1 calendar, but that is still some margin especially when Red Bull set Verstappen‘s car up for the race.

In the Grand Prix, he had a hairy first lap with some close calls against the Aston Martin of Lance Stroll and a slowing Lewis Hamilton.

On the way down to Eau Rouge, Verstappen lifted off the throttle to give himself some space to the car in front and he drove in a calm manner.

This new Verstappen which knows he doesn’t have to go for it to overtake the midfield cars or be over-aggressive.

The best drivers not only don’t make mistakes or have an accident, they somehow know how to avoid incidents too which is what Verstappen demonstrated in the first two laps before the safety car.

From there, Red Bull had the best car, which Verstappen also knew, and he managed his tyres perfectly to breeze past the field, including race leader Carlos Sainz.

Michael Schumacher and Sebastian Vettel‘s record of 13 wins in a season is going to come under threat later this year as Verstappen picked up his ninth victory of 2022 with a magnificent performance.

“I think our car is very efficient,” Verstappen told the press when asked if Red Bull‘s pace was track specific.

“Then this track I think suits it perfectly, maybe. So I know that some tracks which are coming up might be a little bit more difficult and I expect again a good battle with Ferrari, it was just that yeah, this track seemed to be perfect for the car.”

Ferrari get their strategy right…until the last two laps

It would be unfair to call out Ferrari‘s strategy team until the last two laps of the Belgian GP.

Sainz had to pit early to avoid being undercut by the Red Bulls and no strategy would have seen him finish higher than third. A solid job by the Spaniard.

“I think we left nothing on the table today,” Sainz told the press. “We were just not strong enough compared to them. They were on another planet this weekend.

“They were just strong in qualifying, strong in the race, better in tyre management, stronger on the straights, stronger in the corners – some of them.

“We were just not quick enough, unfortunately, this weekend. After the strong start that I got, the strong restart of the safety car, the gap that I had after the first couple of laps, I felt that I was on for a good opportunity.

“But very quickly, I realised that I went into overheating with a tyres. I was sliding around a lot and it [the win] was not going to happen.”

Leclerc‘s race was ruined when a tear-off, allegedly from Verstappen, got stuck in the right-hand side of his car.

He was forced to pit but was at the very back of the queue so it was always going to be an uphill struggle as he lost over two seconds per lap by getting stuck and overtaking slower cars.

There was nothing wrong with his strategy, although you could argue some of the team radio discussions are not normal, until Ferrari decided to go for the fastest lap of the race by pitting Leclerc with two laps to go.

He initially came out behind Fernando Alonso which was unnecessary and he didn’t even get the fastest lap anyway.

Despite Leclerc overtaking Alonso on the last lap, he sped in the pit lane so was given a five-second time penalty which dropped him to sixth. Three points needlessly lost.

Ferrari made a mistake by pitting Leclerc, but the driver made an error by speeding in the pit lane.

Mercedes miss out on podium

Without question Hamilton was at fault for his Lap 1 collision with Alonso at Les Combes and he was slightly fortunate to get away with a grid penalty for the Dutch GP at Zandvoort.

When two drivers go side by side into a corner, all the driver on the outside has to do to not be in the wrong is leave enough room to the inside driver. Hamilton didn’t do this.

He admits it was his mistake and it was just a simple misjudgement from the seven-time world champion.

“Looking back at the footage, Fernando was in my blind spot and I thought I left more room than I did, so it was my fault and I paid the price,” said Hamilton.

“I’m just sorry for the team, we had a chance of third and fourth today. The car felt good on the laps to the grid, we’d got it into a good place and I’d made a good start.

“After three weeks away, I was looking forward to racing today so it’s frustrating, but it is what it is. Right now, my job is to focus on the next race, I need to recuperate and get back on the treadmill.”

Looking at the pace George Russell had, finishing just 2.3 seconds behind Sainz, a podium was possible for Hamilton.

He would have been running second early on and with his typical exceptional tyre management, Hamilton could have beat Sainz on merit.

As for Russell, he did a superb job in a car which Mercedes will be gutted, isn’t any closer to Red Bull.

They will be hoping the Spa track layout and cooler conditions in qualifying, created the low point of the second half of their season.

“I don’t think we can be satisfied with this weekend – if you see Verstappen, he has leaped above us all,” said team principal Toto Wolff.

“We really need to find out how we can improve our car because the gap is just too big. We’re giving the drivers a very difficult car to drive and it hasn’t got the pace on a single lap so we need to work ourselves out of this situation.

“Over the next four days, we’ll be putting our heads together, setting our sights on the next race and also next season.

“It’s important we stay level-headed, keep our spirits up and don’t flip too much between elation and depression – this weekend is a low but in Hungary three weeks ago, we were thinking we will absolutely win a race, so we’ll never give up.”

Esteban Ocon was one of the stars of the weekend, beating teammate Alonso in qualifying and quietly coming through the field beautifully to finish seventh.

Ocon might be ahead of Alonso in the championship standings, but that isn’t a true reflection of the season as the two-time F1 world champion has been the better driver.

But if Ocon can perform the way he did at Spa, it’ll do a world of good for his stock and reputation.

“The car was fast, and I personally had a lot of fun out there racing today, especially with those double overtakes,” said Ocon.

“Well done to the team for their work this weekend, we can all be proud of ourselves. I was feeling confident all race and the car felt great and who knows what could’ve happened if we had started further up the road!”

Alex Albon has revived his career in style this year and thoroughly deserved his third points finish of the season.

He also reached Q3, meaning every driver has made the final part of qualifying in 2022 which shows the quality of the grid, to start sixth.

Albon made full use of his slippery Williams which was extremely strong on the straights. Even with cars within DRS range, such as the McLaren drivers of Daniel Ricciardo and Lando Norris, they couldn’t get close to Albon.

“This was one of the tougher races I’ve done in my career and also one of my personal bests. We did the best job we could today and it’s a good feeling,” said Albon.

“On the lap to the grid, it was clear that tyre degradation was going to be really high and hotter track temperatures than we have had the rest of the weekend made tyre wear worse.

“On the final stint I was thinking about three-stopping, but we held on, kept Lance behind and then it was about not making any mistakes.

“I think, as a whole, we executed the weekend from FP1 onwards well, maximised the positive of our car being quick on the straights, and made no mistakes.

“We experimented, made the best of the tyres in qualifying and maximised the results potential in the race, so I’m very happy.

“As a team, we had a complete weekend and that’s what it shows; when you don’t have the fastest car but you do everything right, you can still come away with a point or two.”

To keep his midfield rivals behind in the middle sector and not make any mistakes despite being under pressure all race by multiple cars was excellent from Albon.

Watch out for another top 10 result at Monza in a fortnight’s time.

Spa stays on the calendar for 2023

It’s just the one year for now but the good news is there will be a Belgian GP next year.

For whatever reason, there have been very few exciting races at Spa over the last decade but it’s still a track the drivers and fans adore.

The high-speed nature, the history and the return of some gravel traps makes it one of the highlights of the calendar.

Some of the newer races like Baku and Jeddah are great for racing in modern F1, but the historic permanent tracks that featured on the original 1950 calendar must stay.

The existence of Silverstone, Monza, Monaco and Spa in F1 should never ever be in doubt.