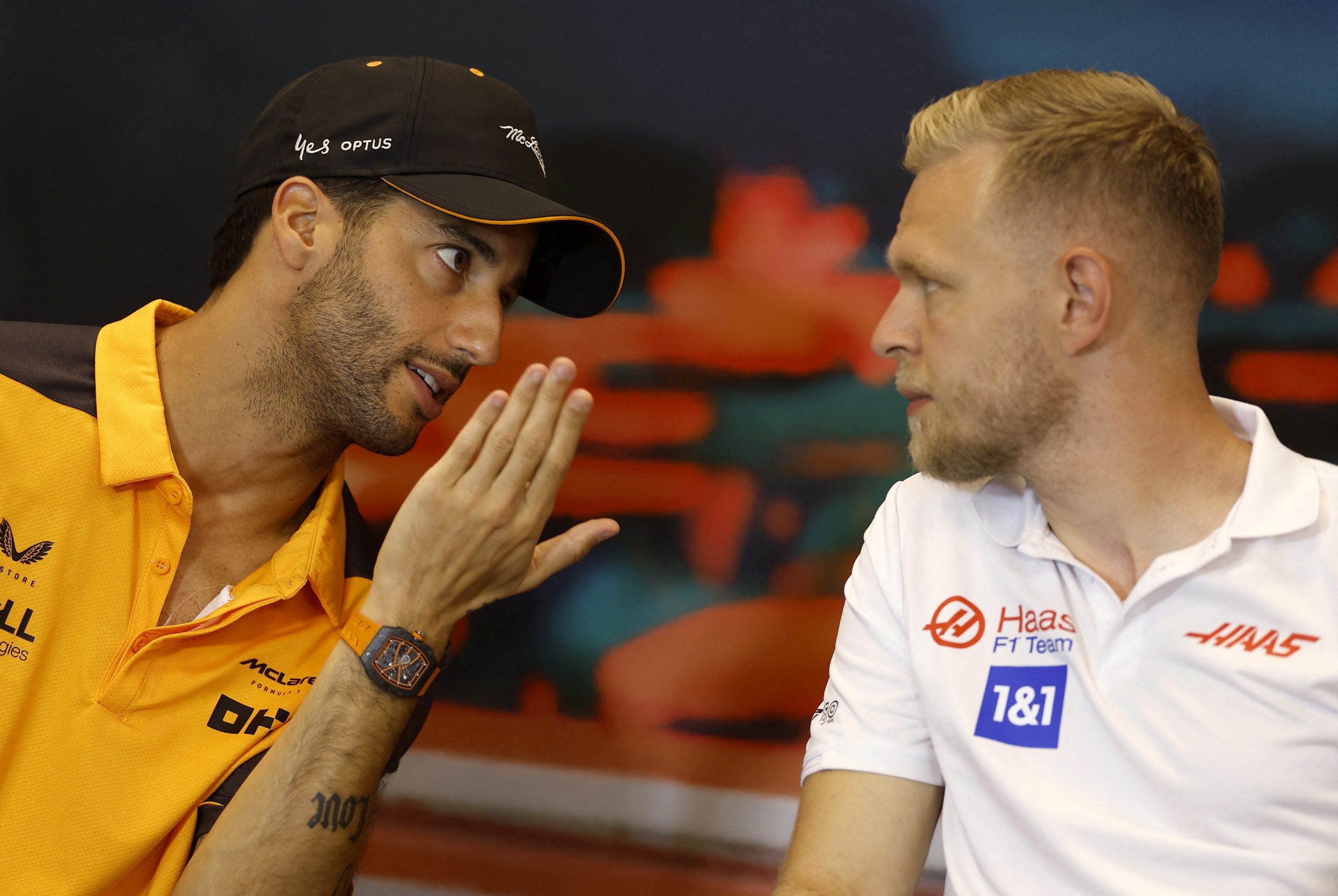 Despite McLaren boss Zak Brown‘s recent comments attempting to reassure the public that his relationship with Daniel Ricciardo has ‘never been better’, there’s no doubt the Australian is under intense pressure at McLaren, with a slew of drivers waiting in the wings to snap up his Formula 1 seat.

Seen as a huge coup for the team when they signed Ricciardo for 2021, McLaren have regressed since then, and Ricciardo hasn’t been able to challenge Lando Norris anywhere near regularly enough.

Ricciardo‘s contracted to McLaren until the end of 2023 but there’s been an increasingly loud cacophony of rumours that have suggested the 33-year-old will be out of a drive come the end of the season.

“Lando definitely has an edge,” Brown told Sky Sports F1. “We would obviously like to see Daniel much closer to Lando and have a good inter-team battle.

“Daniel is just not comfortable yet with the car, we’re trying everything we can. Again it was a disappointing weekend. Short of [Ricciardo’s win at] Monza and a few races, it’s generally not kind of met his or our expectations, as far as what we were expecting.

McLaren are currently exploring their options for 2023 and identified Colton Herta, Alex Albon and Sebastian Vettel as three names on the table.

But as with any time a seat opens up in the pinnacle of motorsport, there’s plenty more drivers in the frame.

Herta would be the first American to race in F1 since Alexander Rossi with Manor Marussia in 2015, and has got many motorsport fans excited about the prospect of the move.

He recently tested a 2021 McLaren at Portimao after the 2022 Austrian Grand Prix, which couldn’t have been timed any better with the rumours swirling.

An Indy Lights star at the same time as Ricciardo‘s Red Bull career was coming to end, the 22-year-old finished third in IndyCar in 2020 to announce himself on the biggest stage.

Herta‘s contract with Andretti Autosport expires at the end of 2023, lining up perfectly with Ricciardo‘s deal, so he may be one to look at for 2024 instead, but Herta seems very well-poised to take his place at Woking at some point soon if he can impress in F1 machinery.

Possibly the most deserving of this list, Gasly‘s career feels like it’s slipping into a Sergio Perez-esque tenure – a premature promotion to the top ranks preceding a consistently fantastic stretch in the midfield, despite being capable of so much more.

This offers the Frenchman, who’s still only 26, an opportunity to break that cycle and get into a team that’s striving for the top and would be the second time he’s replaced Ricciardo in a team.

He’s rapid, reliable and already wily enough to know his way around battling wheel-to-wheel in the midfield, you have to imagine he’d be able to mount a better challenge to Norris than Ricciardo‘s managed so far.

Admittedly, the one-year contract extension he recently signed to stay at AlphaTauri is a problem, but there’d surely be ways to resolve that if McLaren decide he’s their man.

The only driver on this list that’s already been confirmed to have a McLaren seat for 2023, but which category will it be in?

That was the question on everyone’s lips following this week’s announcement, with McLaren fielding IndyCar, Formula E teams alongside their Formula 1 outfit.

Like Herta, the announcement came at the perfect time to stir the pot, and the reigning IndyCar champion will also get chance to work with F1 machinery later this year.

It’ll be fascinating to see if Palou and Herta get any official F1 tests this year, and where they stack up – that’ll surely go a long way to deciding this battle.

One of the most intriguing options linked to the seat, the four-time champion was teammates with Ricciardo at Red Bull 2014 but was outperformed by the Australian and left at the end of the season for Ferrari.

He’s arguably never matched his Red Bull peak since leaving Milton Keynes and hasn’t starred since joining Aston Martin ahead of the 2021 season.

But he’s at least matched teammate Lance Stroll this season and had a standout race in Baku, finishing sixth.

Out of this list he’d also probably be the best driver to support Norris too, he might not challenge him for pace weekly but obviously has a wealth of experience to pass on if McLaren are looking for that rather than a driver to really race Norris hard.

Contracted to the Alpine academy, McLaren did add the Australian to their pool of reserve drivers ahead of the season opener in Bahrain in a move that was perhaps under-reported too heavily at the time.

Piastri does deserve a shot in F1 and even if he remains with Alpine, a move to McLaren could function similarly to Albon’s return this year, where he stays sponsored by Red Bull despite racing with an unaffiliated team.

After an unprecedented three-year stretch of success where Piastri driver won Formula Renault Eurocup, F3 and F2 back-to-back-to-back, the 21-year old’s talent and poise is undeniable.

The ex-Prema driver and reigning Formula 2 champion is set to get his first F1 practice session after the summer break, and if he performs there will just cement his burgeoning reputation.

But he’s not been expressly linked with the seat, which does douse some of the optimism that he’ll finally get the break he undoubtedly deserves.

The British-Thai driver is a surprise name in the mix for some, given he’s still only eleven races removed from his disastrous spell at Red Bull.

But it’s easy to forget how brightly he shone at Toro Rosso to earn his big break in the first place, and he’s seemingly rediscovered that form at Williams in 2022.

He’s dominated Nicholas Latifi on both days of the race weekend this season, and is unlucky to have only picked up three points.

A jump to McLaren would be a good compromise, he’s still not proven enough to show he’s deserving of another shot at a top team but if he could match Norris in the same machinery that’d be a huge feather in his cap.

Pato O’Ward – A mainstay representing McLaren in Indycar over the last few years, O’Ward’s been linked to Woking a few times. He’s tested with McLaren previously and .

But even if McLaren were to go more left-field and take a driver from their American programme, it feels O’Ward doesn’t quite have the momentum of Herta or Palou.

Still he has tested F1 machinery with them before and was an impressive fourth in the 2021 Abu Dhabi post-season test, finishing a second and half behind our next outsider…

Nyck de Vries – The Dutchman is an ever-present whenever a new seat surfaces in F1, but just seems a bit too distant from the team.

The pint-sized 2019 F2 champion spent nine years in their young driver programme but left at the end of 2018 and has since pursued closer links to Mercedes, including winning the season seven of Formula E in 2021.

Stoffel Vandoorne – De Vries’ ex-teammate Formula E team, the Return of the Stoff would be a great story after the highly-tipped Vandoorne failed to turn GP2 dominance into F1 success in 2016 and 2017.

Crushed by Alonso then, he wouldn’t find it any easier up against and aged 30 it’s likely the Belgian’s moment has passed for another chance at the top.