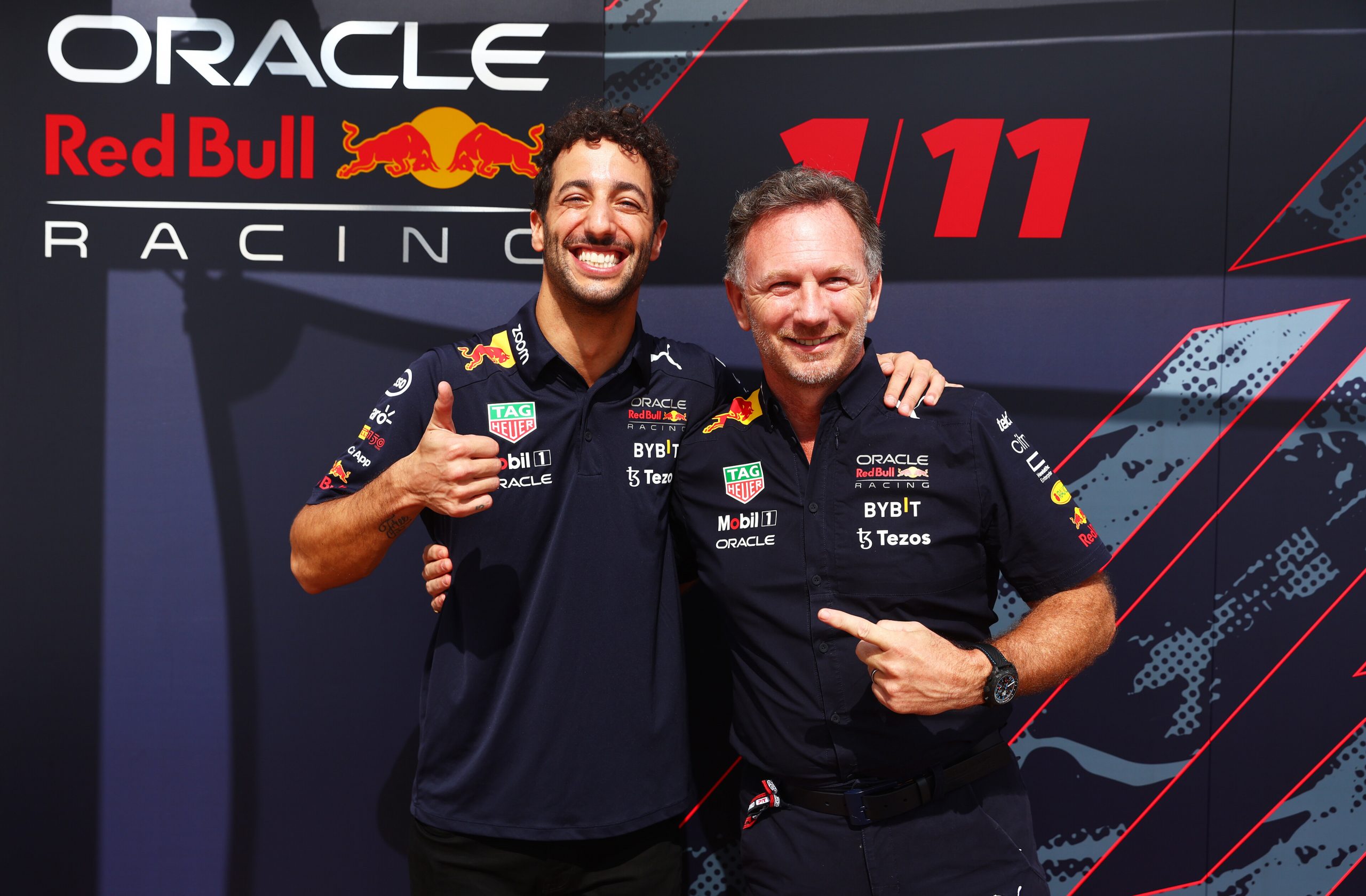 Fans welcomed Red Bull‘s announcement that Daniel Ricciardo will return as their third driver for 2023, as the Australian will stay around the Formula 1 paddock and aim to find his way back into a full-time seat.

Ricciardo was set to stay with McLaren for a third season but was axed for compatriot Oscar Piastri after a woeful couple of years in papaya.

He seemingly wasn’t interested in seats lower down the grid as both Haas and Williams had openings, instead opting to take a year on the sidelines after a mentally brutal spell at McLaren.

But the aim is still a return to the grid and for the man whose F1 career took off at Red Bull, plenty of fans are hoping for a romantic full-time return to the team for 2024 or 2025.

What have Red Bull said?

It wasn’t the cleanest announcement from Red Bull, as Helmut Marko broke the news on Friday ahead of the Abu Dhabi Grand Prix, before any contracts had been signed.

That led to an awkward but well-handled press conference for Christian Horner, who had to tell the press what Ricciardo would bring to the team whilst remembering to speak speculatively with no deals done and dusted.

But despite interest from Mercedes, there was no last-minute change and Ricciardo made the news official three days after the Abu Dhabi Grand Prix.

However, Ricciardo‘s not a full test or reserve driver, instead he’s a third driver whilst Red Bull Junior Liam Lawson also holds backup responsibilities and Ricciardo will do a cherry-picked schedule.

“It means that he keeps in touch with Formula 1,” Horner said. “We’ll obviously be using him on the simulator and he’ll potentially be attending some events.

“The demands that are on the race drivers these days just from a marketing perspective alone, we’re very active as a team, we do many, many show runs and events.

“To have a driver of Daniel‘s profile and history with the team within the group is only an asset for us. Daniel‘s a big character, it’s been disappointing to see his performance this year, I think he would’ve wanted a lot more out of the season.

The big question now is what’s next for Ricciardo so we asked our Total-Motorsport.com journalists – Will he make a full-time return to F1?

Before the Japanese Grand Prix weekend I thought it unlikely that the colourful Australian would return to F1 in 2024-25, there just didn’t seem a logical direct route to a top drive.

After all, no top drives were left, and it seemed a third driver role would achieve very little except prolong the wait.

But then the Multi 11-1 incident happened in Brazil, with the resulting fallout getting personal between messers Max Verstappen and Sergio Perez.

Now back at Red Bull as their third driver, Ricciardo has kept his foot planted in the F1 door as his new role will give him a chance to recharge his batteries and get reacquainted with the Red Bull system after four painful years away.

He’ll need to act quickly though, as by the time Perez’s contract expires Ricciardo will be 35 and with Charles Leclerc’s deal at Ferrari expiring, the Australian may not be Red Bull’s first choice.

If Red Bull decides not to rehire him, Ricciardo may miss his chance to jump back on the F1 train as midfield teams are looking for younger, cheaper drivers to fill their needs whilst top teams are focused on locking in their current lineups until 2025 and beyond.

When news of Ricciardo‘s move to Red Bull broke, plenty of fans seem to have read that as the Australian going into a Piastri-like role – spending a year on the sidelines with the expectation of a full-time seat after that.

I don’t think it’s that simple. Ricciardo‘s coming off the back of two superlatively bad years at McLaren, and anyone hiring him will be taking a risk.

Having survived the Pierre Gasly and Alex Albon experiences I don’t think Red Bull will want to be gambling on that second seat any time soon as long as Perez does the job.

Although he underperformed in 2022, the Mexican has had a few standout races and he hasn’t been as bad as some are making out – he’s arguably been a top-ten driver and that suits Red Bull just fine.

I also think he and Verstappen can move past their spat and while the Dutchman launched an extraordinary tirade against the media and fans following the Brazilian Grand Prix he did acknowledge the need to communicate better within the team.

In short, Perez is the perfect foil for Verstappen and I don’t see the need to change that. Ricciardo could well end up at another team in a Nico Hulkenberg-type return but that’s never a certainty, the likes of Mick Schumacher and Felipe Drugovich are on the market and next years’ F2 grid could be the most talented in a couple of years so it might be more congested than Ricciardo would like.

Given that Fernando Alonso, Kevin Magnussen and Hulkenberg returned, I am almost certain Ricciardo will be back on the F1 grid too with a good chance of it happening in 2024.

He will be linked to every midfield seat next year whether that’s at Haas, Alpine or Alfa Romeo.

A lot will happen over the next 12 months so even though on paper it looks like there will be little movement in the driver market, one breakdown in team relations or a driver deciding to leave their contract will cause silly season mayhem.

Ricciardo is less likely to replace Perez at Red Bull, but there’s still a chance if certain factors come together.

Firstly, Perez will have to either underperform or fall out with Verstappen. Then, Yuki Tsunoda and Nyck de Vries would have need to fail to set the world alight. It’s all out of Ricciardo‘s hands but he is ready and waiting.

He would bring experience, personality and is one of the most marketable drivers on the grid so the majority of the teams on the grid would happily welcome him should they need to change their current line-up.

If I’d been asked this question at the start of November, I’d have said no.

However, the Australian’s return to Red Bull coupled with the controversy sparked in Brazil between Perez and Verstappen has opened up a route back for Ricciardo.

Verstappen was undoubtedly wrong for doing what he did at Interlagos, but until anyone can challenge him at the Milton Keynes-based outfit, he’s never going to take the fall for a teammate squabble.

Perez has one year left on his deal and should he continue to underperform relative to the car, or rock the boat within which Verstappen is treated like precious cargo, a familiar face in Ricciardo could become a very attractive option.