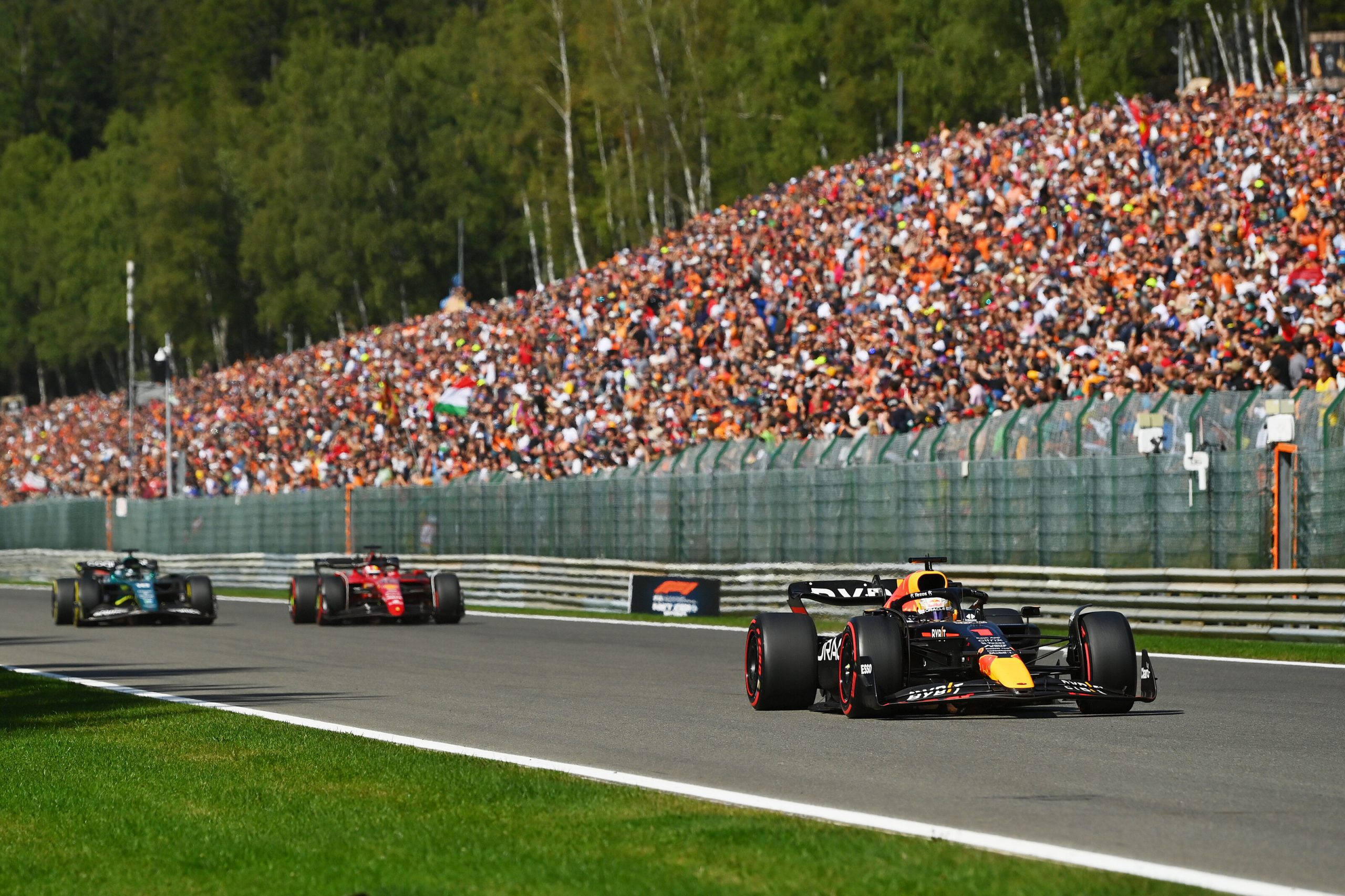 The Belgian Grand Prix served as a microcosm of the 2022 F1 season – it promised a shaken-up order and a chance for Ferrari to hit back at Red Bull, but ended with another dominant Max Verstappen win and Mattia Binotto batting away more questions on strategy.

Despite starting 14th, Verstappen scythed his way through the field early on and was into the podium places with 80 percent of the race left to run.

By the time he blew past George Russell on Lap 8, rear wing gaping as if itself in awe of the sheer speed of the Red Bull on the Kemmel Straight, the race win was as good as his.

Slipstream and DRS in that 20-second flat-out run from La Source to Les Combes made any attack undefendable in that stretch, it was rare for cars to even reach the chicane side by side (apart from the first lap – just ask Lewis Hamilton).

In November 2020, The Race ran a poll on its YouTube channel asking whether DRS should be kept, scrapped immediately or scrapped once the new 2022 regulations arrived.

The latter was the most successful proposal with 45 percent of fans and a further 12 percent thought it should go immediately, whilst 43 percent were in favour of keeping it.

So a clear, if not dominant, win out of nearly 60,000 votes to scrap DRS, and yet here it remains, still stalking around every race like a killjoy at a houseparty.

In that same project by The Race, public opinion was in favour of binning DRS as soon as F1 no longer needs it, and their writers backed that up with their opinions.

And the 2022 cars have shown they’re so much more suited to a world of purely organic overtakes without the need for an aid like DRS.

Spa itself has plenty of options for daring overtakes if you’re willing to drive by the seat of your pants, it’s time to equalise things and bring those back into play.

Currently, drivers are disincentivised from overtaking for effectively the whole last sector for fear of having that reversed at the start of the next lap and going back to square one.

We’re clearly not the only ones with this on our minds post-race, judging by comments made to the press, with Lando Norris the leading critic.

“I think we were probably one of the quicker ones on the straights,” Norris said, “where we lose a lot is in DRS for some reason, I think yesterday we were quicker than Red Bull.

“But then the Red Bull opens DRS and gain some are like another 15 kph and is in a completely different league to a lot of people, so there’s something where we’re maybe missing with DRS.”

However, that’s not the only opinion in the paddock. The 2022 Saudi Arabian Grand Prix saw a battle between Leclerc and Verstappen that was either sublime or ridiculous, depending on who you ask.

Both drivers tried to game the other into taking the lead heading onto the main straight, and after the race the victorious Dutchman admitted he probably wouldn’t have been able to overtake his if it weren’t for DRS.

“I think DRS needs to stay for now, otherwise the races would be very boring,” Leclerc added.

“As much as following has been better from last year to this year, and it’s a very positive step, I still think it’s not enough to get rid of the DRS.

“It’s part of it and I actually quite enjoy it. It’s part of the strategy for each driver in terms of defending and overtaking, and it’s part of racing for now.”

So there’s definitely not a consensus one way or the other, but it’s worth remembering that Norris’ comments are by far the most recent.

Leclerc and Verstappen were talking in the early stages of the season whilst teams were still figuring out their cars and particularly the optimal balance, whilst Alonso was speaking before a single 2022 car had been unveiled.

With this split opinion, maybe the ideal solution is to deactivate the system at one or a few races, and see how it affects the racing.

There hasn’t been a classic Belgian Grand Prix for a long while, and the announcement over the weekend that Spa will remain on the calendar was dulled by another procession through the Ardennes come Sunday.

So why not trial deactivating DRS at next year’s race there? It literally can’t be worse than this year’s race – unless it’s a repeat of the 2021 Belgian Grand Prix. Still not over that.

And Spa compounds the DRS problem by its integral circuit design. Baku and Interlagos both have huge flat-out sections incorporating shallow corners and a straight, but at both there’s the chance to recover immediately afterwards with another straight.

Abu Dhabi slips the equation by having its record-breaking back straight come before another kinked flat-out section but the principle’s the same.

Meanwhile, it’s nearly impossible to stay even side-by-side with an overtaking car at the end of sector one, and that kills any chance of continuing a battle through No Name Corner or Pouhon.

So come on F1, let’s do it. Because there’s nearly a generation of F1 fans that’ve grown up without seeing a great Spa race that needs to change.