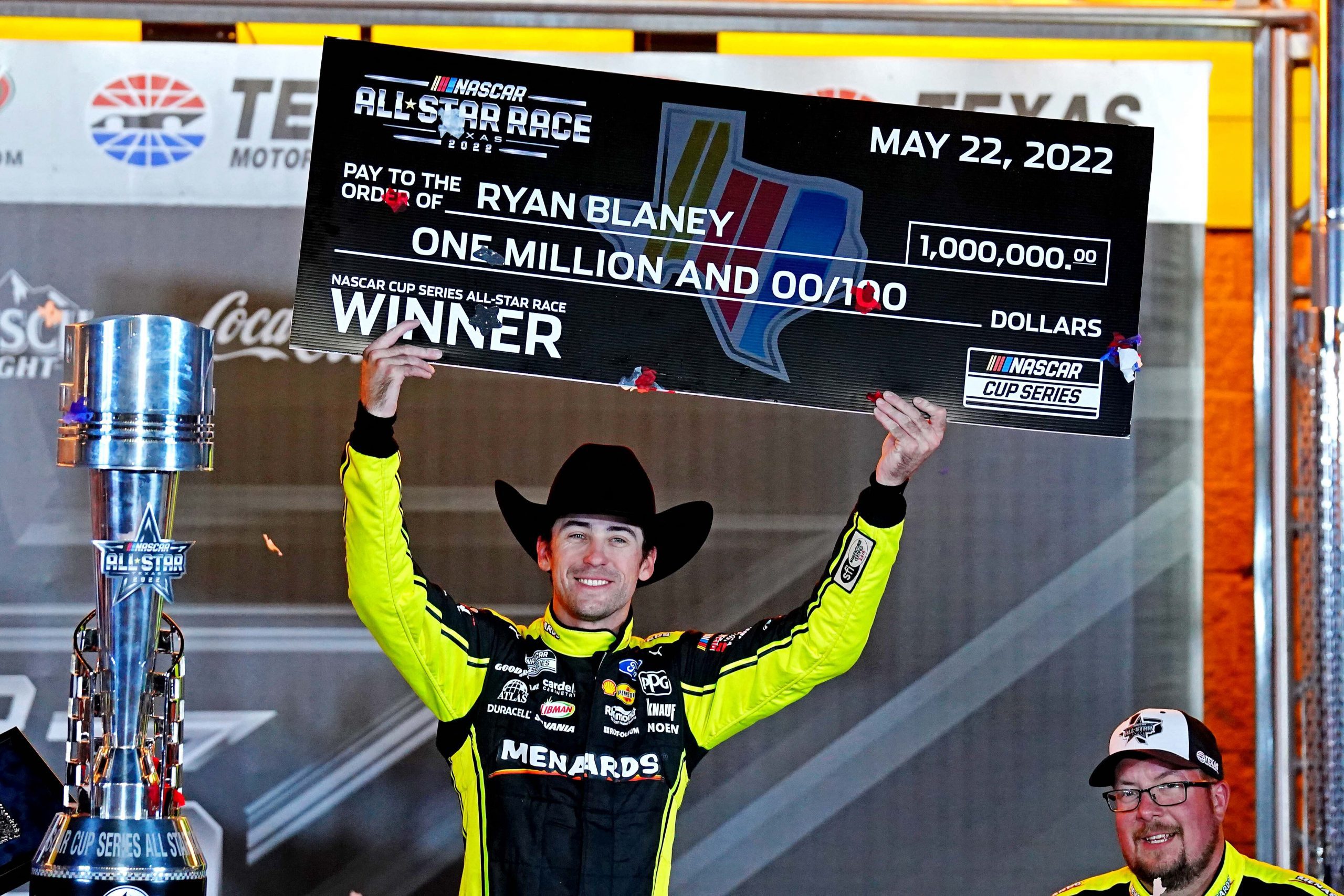 Unlike traditional point-scoring races, NASCAR’s All-Star is designed to create excitement for fans of the sport meaning that the rules are altered to spice up the proceedings. One of those changes is the fact that race can only be concluded under green flag conditions meaning that the race, which was rich in attrition to begin with, also had the added drama of having Blaney having to reinsert his window during the caution period.

Blaney, who technically crossed the finish line in first, was forced to take a restart in overtime as the caution flag came out just as he passed the start-finish line for what he assumed was the final time.

Assuming he had won, Blaney took down his window to celebrate his million-dollar win, only for his crew to inform him that the race was still not officially over. Despite his half-hazard attempt to reattach his window, NASCAR allowed Blaney to continue racing and eventually take the checkered flag in one of the strangest race finishes in NASCAR history.

“I do want to thank NASCAR for letting me kind of fix it and not make us come down pit road,” Blaney told Fox Sports.

“That was really tough, and then having to do it all over again after trying to get the window net back up there.”

While Blaney celebrated his win, others voiced their concern about the NASCAR officials not following protocol, with Denny Hamlin quite vocal in his criticisms.

“Whatever the rule is, let’s be consistent and play by the rule,” Hamlin exclaimed on pit road.

“It’s unfortunate, because he made a mistake. He should have won the race, he’s a hundred yards from winning the race. Where NASCAR really got away with one is we nearly crashed off of (Turn 2), and so when I send him head-first into traffic and the window net’s down, I don’t know. Then they’ve got a lawsuit on their hands.

“I don’t know whether it’s a moral problem that they had, they were like ‘Well, we cost him the win because we threw the caution, and we hate to take away that.’ I think they just had a moral dilemma instead of just playing by the rules like they’re supposed to.”

NASCAR’s senior vice president of competition Scott Miller accepted that the call might have been the wrong one with the executive also admitting that there was no way to verify if the window was latched on properly or not.

“Coming to green, he was warming his tires on the back straightaway, you could clearly see both hands on the wheel warming the tires up. The window net was up, no way for us to know if he got it 100 percent latched or not,” Miller explained to reporters.

“And at that point in time, no way we can be certain that he didn’t get it latched. So there’s no way we could call him down pit road at that time.

“If he couldn’t get it to where it was up and we had some doubt that it was latched, then we would have had to do something with it. Because we wouldn’t have allowed him to start if it was just laying down on the door.”

Earlier in the day, championship contender Ross Chastain was thrown into the air after hitting the number 18 car of Kyle Busch. The ensuing impact saw Chastin smash into Chase Elliot with all three drivers escaping serious injury.

With the conclusion of the All-Star event, NASCAR will head to North Carolina for one of the season’s biggest events the Coca-Cola 500 held at the Charlotte Motor Speedway.