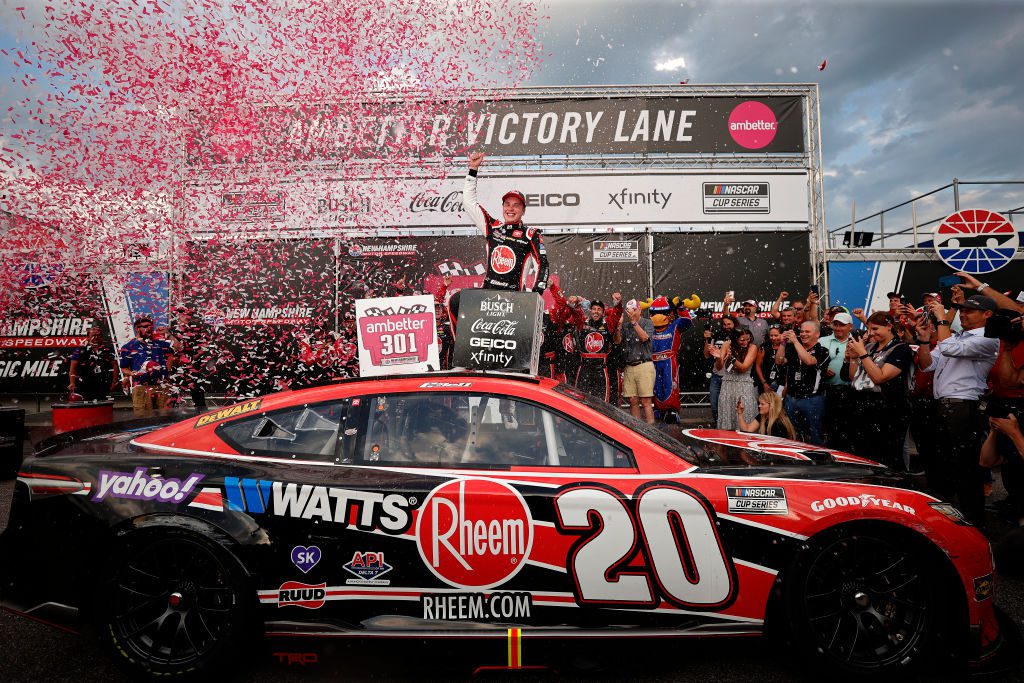 Bell led the last 42 laps of the 301-lap race, finishing ahead of series leader Chase Elliot who hasn’t finished lower than second in the previous four rounds of the 2022 NASCAR Cup Series.

The win solidifies Bell’s bid to make the 2022 Play-offs with the #20 Toyota driver now causing a massive shake-up to Play-Off places as the regular season reaches its climax.

Bell, who comfortably beat Elliot by over five seconds, was relieved by the timing of his second ever win in the series, with the Joe Gibbs driver now looking likely to secure a spot in the coveted Play-Offs.

“Man, that one was much-needed right there,” Bell said after the win.

“I tell you what, that was a helluva race from my viewpoint. It was so much fun racing with the 45 (Kurt Busch), the 22 (Joey Logano) and the 9 (Elliott).

“We were all running different lines. That was a blast. Just so happy to be here at Joe Gibbs Racing and so good to get that 20 car back in Victory Lane.

“Winning Cup races is hard. Just seems like we’ve been close then we had fallen off a little bit last week. I was talking to my best friend and I told him, earlier in the year I felt like we were right on the verge of winning.

“Then the last couple of weeks I felt like we were pretty far away. But here we are today.”

Elliot had no answers for Bell’s pace

Despite winning last weekend’s race in Atalanta, Elliot could not match Bell’s pace today with the Hendrick Motorsports driver accepting that his execution during the final part of the race was poor.

“I feel like just a poor run of execution on my end in the last run,” Elliot commented.

“It took me a while to get past Joey (Logano) and the 45 (Busch) and I had to run harder than I wanted to.Just make a couple mistakes and couldn’t get much breathing room.

“When you’re in position like we’ve been in, you need to finish it off.”

Bubba Wallace, NASCAR’s only active black driver, completed a great day for Toyota, with the 23XI Racing driver claiming his second top-five finish of the year.

“Just proud of the team, proud of myself and proud of everybody at the shop,” Wallace stated.

“It’s been hell for me the last month so good to come out with a top five. This sport humbles you so there’s really no surprises. Have to keep the task at hand and be mindful of your surroundings and do your job.’”

The NASCAR Cup Series will now head to the Pocono Raceway for the M&M’s Fan Appreciation 400 scheduled for this upcoming weekend.