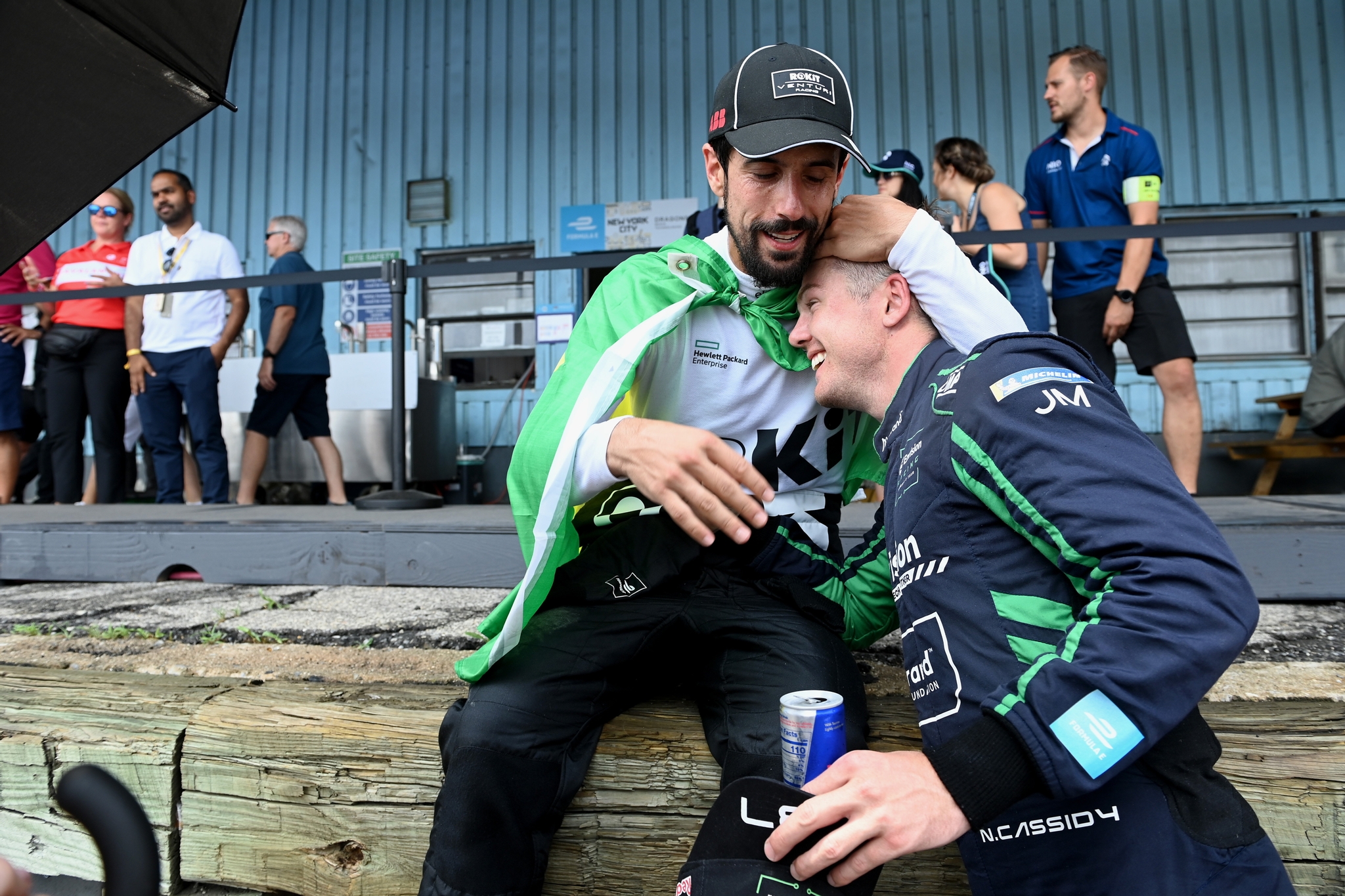 Even by Formula E standards, there were some crazy moments throughout the weekend of the New York City E-Prix which shook up the thrilling championship battle which is set to go down to the wire.

Stoffel Vandoorne emerged as the new leader in the Formula E standings after a second place on Sunday to move ahead of Edoardo Mortara.

Mitch Evans kept his title hopes alive with one of the saves of the season when coming through the field in the second race, whilst Jean-Eric Vergne had a nightmare, scoring no points in either E-Prix.

It certainly was a weekend flooded with drama, quite literally at one point.

Mortara’s costly mistake in the rain

Running in fifth, Mortara lost eight points for speeding when the full course yellow was called in Race 1 at New York as a deluge of rain caused chaos.

With 10 minutes to go, rain began to fall Brooklyn, but it was particularly wet at Turn 6 where the track flooded in minutes.

Race director Scot Elkins made a great decision by calling for a full course yellow, although it came just seconds too late which was impossible for anyone to know at the time.

Race leader Nick Cassidy aquaplaned into the barriers at high speed with Lucas di Grassi and Stoffel Vandoorne scarily following the Envision driver into the wall.

Mortara lost control of his car too, but somehow gathered his Venturi up to avoid the pile-up and carry on his way.

In the build-up to his remarkable save though, Mortara failed to slow down sufficiently so was awarded a five-second time penalty which dropped him down to ninth.

However, things got worse in qualifying for Race 2 when a brake by wire problem meant Mortara couldn’t set a lap time safety so started at the back of the grid.

He recovered to take 10th place to add a potentially important point to his tally, but it was a disappointing weekend for a driver who came into New York off the back of four consecutive podiums.

Vergne had been on an amazing run of scoring points at every race until New York as two poor qualifyings meant he started down the order.

This put him in the middle of the pack where it often gets manic. Unfortunately for Vergne, he was involved in a multi-car collision at Turn 1 involving Evans, Andre Lotterer and Antonio Giovinazzi and Andre Lotterer.

Contact with the wall in qualifying for Race 2 put Vergne in the middle of the pack again, this time he avoided a crash on the opening lap, only to tangle with Di Grassi on the last lap.

“A difficult race once again, the start was not really good as I was on the inside so I lost a few positions in the traffic,” said Vergne.

“After, the first part of the race was good, I fight back up to 10th until I got ht and ended up in the wall.

“But the season is not over, and we still have four more races to battle for the championships.”

Evans thought he took an incredible podium on Saturday when several drivers crashed in the rain which saw he Jaguar driver move from 11th to third.

However, race control’s decision to not restart the race and take the results from the lap before the red flag meant Evans scored no points.

In Evans‘ mind, he kept his car out of the barriers and believed the conditions were good enough to at least restart the race for the last seven minutes.

“It was intense,” said Evans. “I had a scrappy start to the race, losing a few places at the start being on on the dirty side of the grid.

“Then I began to recover when things started to heat up right before the rain. Obviously it all kicked off in the rain and I was licking my lips because I quite like those conditions and I just passed [Nick] De Vries for 10th then we had the big crash and a red flag.

“I won’t comment too much with the direction the FIA went down because I don’t agree with it.”

Evans thought he had a car that could win in Race 2 despite another slow start to his race from seventh.

In typical Evans fashion, he remained calm and picked off cars one by one until De Vries cheekily got by at the hairpin which stalled his progress.

Evans aggressively tried to fight back on the run down to Turn 6, but he caught a bump on the inside and had a huge slide in the braking zone, somehow avoiding both De Vries and the barrier.

Eight-time WRC champion Sebastien Ogier was at the event and he was surely impressed with Evans‘ sliding skills.

Still in fifth place, Evans fought back to get by De Vries and made a brilliant move around the outside of Alexander Sims to finish on the podium.

It could so easily have been a no points weekend for Evans, but he used all of his skill and patience to rescue a crucial third place.

Vandoorne the driver to beat

Vandoorne may not have won a race, but he had excellent race pace in both E-Prix, underlining Mercedes‘ great efficiency which has been a major strength all season.

The Belgian hasn’t done anything special in 2022, but he’s clearly outperformed teammate De Vries and is enjoying the handling of his Mercedes.

He makes very few mistakes too, consistently qualifying for the duels which guarantees him a top eight starting position.

Of course, the title situation can change in a split second in Formula E, but Vandoorne is doing all of the right things to give himself a great chance of becoming champion in four weeks’ time.

Next up, it’s the London E-Prix on 30-31 July where there are set to be a few more twists and turns in this riveting title race.